Day two of the new/old schedule. So far so good.

Today I want to discuss publishing logos. You know, those little piccies on the spines of books that most of the major publishers have. 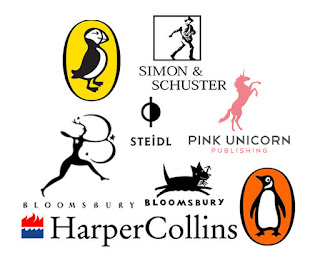 Back in the old days, when there were only like six publishers (waaaayyyy back in the old days), a logo would mean, you knew exactly what you were getting from the publisher without even having to crack the book open or look at jacket copy. A yellow star with a blue background meant it was romance, and sweet romance to boot. No boobies hiding in there. A captial H with a diamond for the the crossbar meant something else. Two red waves, different publisher, same genre. A capital P with a star in the middle, different genre, same publisher. You get my drift.

In the world of self-publishing, there's so much to think about, a logo just doesn't seem necessary. Especially as most self-publishers aren't even thinking of "physical books". With the advent of the e-book revolution, I mean where would you even put something like that. There's no spine. On the title page? On the copyright page? In the back matter somewhere?

Besides, most self-publishers don't form their own companies, and if they do, don't necessarily think about a logo for it. I know I never did. Until I started thinking about publishing to paperback and someone asked me what my logo would be. I was like, why bother? But then I started thinking, I used to have a logo for my catering company. And my cards and brochures were passed around like candy. Back in the day, my name meant something, and the people who hired me knew exactly what they were getting as soon as they saw my logo. 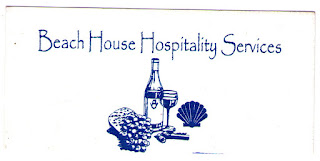 (Sorry for the tilt. I couldn't quite get it to scan right.)

And so now, with a little push, and help from my very dear friend, I have a new logo to accompany Shore Road Publishing. (I so wanted to have Beach House Publishing but that was already taken.) 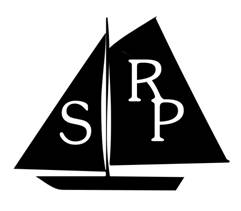 What do you think? Kind of cool isn't it. I think it's quite snappy. (Although I might change it to the same color blue as my original business card.)

And look, I didn't even have to ask, this just magically appeared in my inbox. 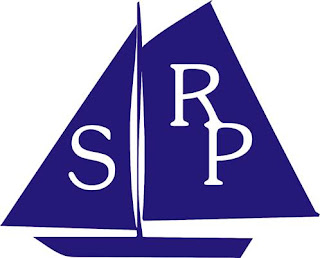 And I didn't even realize when I drew it out, but the RP is actually my real name. So I think that's a really good sign/omen/portent for the paperback versions of my books.

Tell me -- Have you ever thought about your own logo?  What would it look like?

PS I've got a great guest for an interview on Friday at the Piedmont Grille so I hope you'll stop by.
Posted by Anne Gallagher at 6:18 AM

Great new logo! Interesting that you were a caterer. I can't imagine how much energy that took. And I always thought it would be a great idea if there was a rating system like the movies have for books. That way parents could at least monitor what their kids are read...at home anyway.

I like your logo! They are often inside the book so you can use it there as well.

I like it! And I think it's a great idea to have your own logo.

Thanks everyone. Having spent so much time on the water, I think it fits.

And yes, Leigh, catering did take up a lot of energy. 12-18 hour days. I don't think I ever took a vacation longer other than a 3-day weekend, but never from March thru New Year's.

I love the logo. It really stands out. :D

I really like it! Very professional, and it really stands out.

Love the name, love the logo, and I'd read a book just because of the logo alone!

Love it, and I think that blue would be ideal!

Great job - that's an excellent logo. I think blue would be lovely. :-)

I use mine inside my PDF files, as well as the Smashwords file that gets converted every which way.

Obviously, mine are on my paperbacks too. And front and center on my store site, publishing site, and here and there on my other author sites as well. Logos are extremely handy for branding & business cards (like you mentioned). It's also a very good way to look like you know what you're doing without too much effort.

If you want to peek at mine: http://store.brazensnakebooks.com

That is a cool logo! Gives off a serene vibe as well! :)

LOVE IT! And how awesome is it that your initials are in there?
I would definitely try it in the blue, though, to see how that looks. Because it's really cool on your catering logo

You guys are just so awesome, making me feel like everything I do is made of WIN!!! Thanks.

And Jamie, I'll definitely have to stop by your place and pick your brain. You've given me so many more great ideas I hadn't even thought of.

I love the logo, Anne! Very professional and so "you"!

It's a little soon for me to think about that. I have to PUBLISH. I had a logo for a business at one point, and I helped design logos for a living. I LOVE yours. It is clear and gives us a connection to the name. You SHOULD have a logo I think, when you are self-publishing more than a one-time item. And if you even have a name for your publishing concern, it just makes good business sense.

And I would think that the logo could appear on the cover with the picture, perhaps, for Kindle. Depends on the cover design, though. The other thing that is good is your logo can translate perfectly for black and white.

The logo is perfect for you, especially with the "real initials' and all, Rowena ...

Love it, especially the blue version :)

I really love the blue logo as well. Very striking.

I've been thinking about setting up my own publishing brand for my series. I know the name I would use. I may have to get my designer onto it.

It's fun isn't it - taking control.

I like your logo. I think it's snazzy. Now I'm so curious about your real name because I know you've never told me.

Or maybe you did and I'm just the suck at remembering...

I love it, it's very distinctive and not fussy.