Why Can't I Stop Writing? 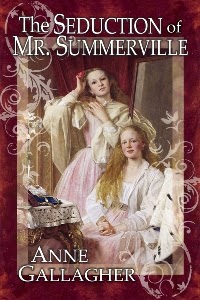 Good Morning. Last week I finally finished THE SEDUCTION OF MR. SUMMERVILLE. And I told you the ending sucked. And it did. Well, yesterday I had a brain fart and a whole new ending came tumbling out. Two pages worth, so I wrote it down, wrote The End and called it good. Which I think it was.

However, once I finished, I started to write the first few pages for another story in this series, which is SUPPOSED to be complete. Problem is, I need to write it from a totally different POV. See, I've had all these characters in my head for a long time. They're like my extended family. I know their quirks and their habits, and the way they speak.

And this character isn't new, he's just never made his presence known to me. He's like a ghostly apparition. I know he's there, he's always there, but I know absolutely nothing about him. Well, other than the fact he lost his missionary parents to influenza, he's 55, and he's a Lieutenant Colonel in the Army. That's it.

And I don't really HAVE to write this story. The Series is finished. Everyone has their happily ever after. Well, except for one person. One VIP. or should I say one VIC (very important character). And that bothers the snot out of me. I mean, why should this VIC not have a happy ending?

I think, because I'm evil.

I think, because I don't really want to let go of this series.

I think, because I've lost my mind.

Anyway, I started writing this new story. I'm not very far in and I'm not crazy nuts trying to write it and finish it. I'm giving myself until the end of January for that. It's going to be short and sweet and to the point. I'm going to try and release it for Valentine's Day. I think that date is appropriate. Who doesn't love a love story on Valentine's day?

In other news, SEDUCTION is available for pre-order, or will be soon, I only uploaded it this morning. It should be across the board by Thanksgiving.

I finalized my gift card orders for school this morning so I'm don't have to be insane this week worrying about it. That means I'll have more time to blog. FINALLY. I'm still having trouble commenting on certain blogs, and STILL trying to rectify that. If you don't see me, it's not because I don't read you, it's because I can't comment. And it's nothing on your end, it's on mine.

I did all my laundry over the weekend, so today marks the BIG CLEAN. Ugh. I mean, the really BIG CLEAN. Dusting and washing windows, as well as all the other regular cleaning. I would rather scrub a 100 toilets than dust.

Tell me -- Do you ever get the urge to write MORE when you don't really have to? Do you think EVERYONE needs to have a happy ever after? What is your least favorite household chore?

Good Morning. Well, it's been a month and a couple of days since I've been here last and well, I've been hard pressed to get back into the blogging groove. I know a lot of you are doing NaNo and don't pop up again until the end of November, but I thought I would fill you in.

The Seduction of Mr. Summerville was going well until the end of October. I have now written 76,000 words, but can't seem to find the right ending. Yes, I have it in my head, but getting it down is a lot harder than I thought it would be. I had this crazy idea that I needed another "big" thing to get down before I
finished it, and so I put it in. Then I had this other crazy idea that I needed a ghost. Yes, you heard right, a ghost in my Regency romance. It's not paranormal, it's just crazy, and I think it works, but I'll let my critters decide. I set aside this past weekend to finish it (I only needed a few more pages) but, alas, I'm still writing. Maybe by the end of the week.

Google Play Well, after trying to upload for several days to Liberio (the only epub maker that will upload to Google) I found out that both laptops and my pc wouldn't allow me to do it. Luckily, Liberio has opened other channels to accept manuscripts to upload and Dropbox is one of them. I haven't had a chance to get to this yet (see above) but as soon as I do, I'll let you know how it goes.

Anne Gallagher Blog For the last couple of weeks, I've been doing posts about Writing a Series. I try to give helpful ideas of what I did, just in case you wanted to write a series. Or maybe spin-off one of your books. I'm in the final stages of wrapping it up. You can find it here.

Volunteering at School I'm still volunteering at Monster's school as the Gift Card Coordinator, and last week I was also the chairperson for the Veterans' Day Observance we had. It was really nice (everyone said so), and the food was fabulous (everyone said so) and the Vets who came had a really great time (they all said so). I'm glad I did it because I proved that we didn't need to spend any money to throw a reception (all the ladies baked something) and we rounded up loose ends from various programs (coffee cups from the Booster Club, napkins from the cafeteria, table cloths from the PTO, and I used all my pretty platters and bowls from my defunct catering company). It was a lot of work, but something I'm glad I did. Veterans' Day is more important to me than Christmas.

Second Reader Services I've been putting together a small business plan for content editing services that I hope will be ready to launch soon. I've edited/critiqued/helped authors in the past get their books ready to publish, and have gotten pretty good feedback from them. My name has appeared in several acknowledgments, so I think that's high praise indeed. I expect to keep the cost down (so much so that my dearest friends are telling me to go higher because I'm worth it) BUT, I know struggling authors don't have a lot of money. I'm hoping to get this into gear in December.

Other than that, I'm trying to decide whether or not to let Monster get her ears pierced for her birthday in December. She'll be 10. I told her she had to wait until she's 12, but I'm wavering. However, I can barely get her to brush her hair before she goes to school. Can I trust she'll take care of her earlobes? Hmmm....

Tell me -- What are you doing? How is everything? What did I miss?