Hey everyone. How's it going? I thought I'd swing by and give you an update on what I've been doing.

It's been a gnarly couple of months, that's for sure. I managed to get 90% of the yard finished before the weather became too awful. My brother surprised my mother on Mother's Day and came down for a week and he helped me with my fence. (Truthfully, I think he just wanted to play with my father's John Deere tractor.)

I also stripped two bedrooms worth of wallpaper, painted ceilings and walls, not to mention stripping dressers and assorted furniture and restaining them. Let's not discuss the yard sale stuff that I keep adding to (But if I keep adding I'll never have the yard sale so I've got to stop at some point.) Then there's the old house that's just a time sucking nightmare. But it's on the market now, so if you know someone who wants to move to Winston, I've got a cute little house for sale. 3 bedrooms, big rumpus room, nice 1/2 acre fenced in back yard. (I'll send you the specs and pics if you want. email me at piedmontwriter at gmail)

Anyway, in April, Monster's school had a fund raising auction and the secretary decided that I should put my books as one of the prizes. I didn't think that was worth much, so I said, "Well, how about if I use their name in my next book?" and that was a good idea. But after I thought about it, I decided that if they really wanted to spend some money, (It was a fund raiser after all) I'd just write a story about them. And that was how it went down in the auction. The prize I donated was that if you won, I would write a Regency novella about YOU (or a person of your choosing). It was supposed to be a love story. Because after all, I am a romance writer.

However, it didn't work out that way. One of the teachers won and then gave it to her assistant. There's been a whole lot of back and forth with this story line, but I think I've worked it out and what I've come up with will be a fun little exercise in past lives and history lessons. At least, that's what I'm hoping for. We'll see how it ends up. (If you want to know more, there's a tab under my header called A Not So Secret Project on my Anne Gallagher blog.)

Also, in case you didn't know, or I didn't tell you (which I know I didn't) THE LADY'S MASQUERADE is 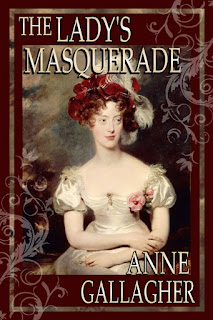 out across all venues in e-version. I've also been working on the paperback copy, and after one more run-through it should be ready to go sometime this week. What you may also want to know about this book is that I'll be holding a give-away on Goodreads for it during the month of June. Well, that's the plan anyway. So check over there if you'd like a copy. I'm giving away 3.

I'm also going through all my other books to get them ready for paperback. Yes, they were already out once, but after making so many changes I needed to revise them. I also revised all my e-versions so they're totally up-to-date. That's the nice thing about self-publishing. I can always change what I don't like.

I've also been outlining my next books like a crazy person. I've never outlined before, well, precisely outlined like a synopsis, so it's been fun. I have no idea if I'm going to use them, but it's been a fun exercise. I've also developed a few more little short stories for my Robynne Rand personna, but haven't sat down to write anything yet. I don't really have the time just yet. Although, not having written for 5 months, the itch is definitely starting to grow.

So that's it. That's where I am and what I've been doing. Not really all that exciting, but that's fine for me.